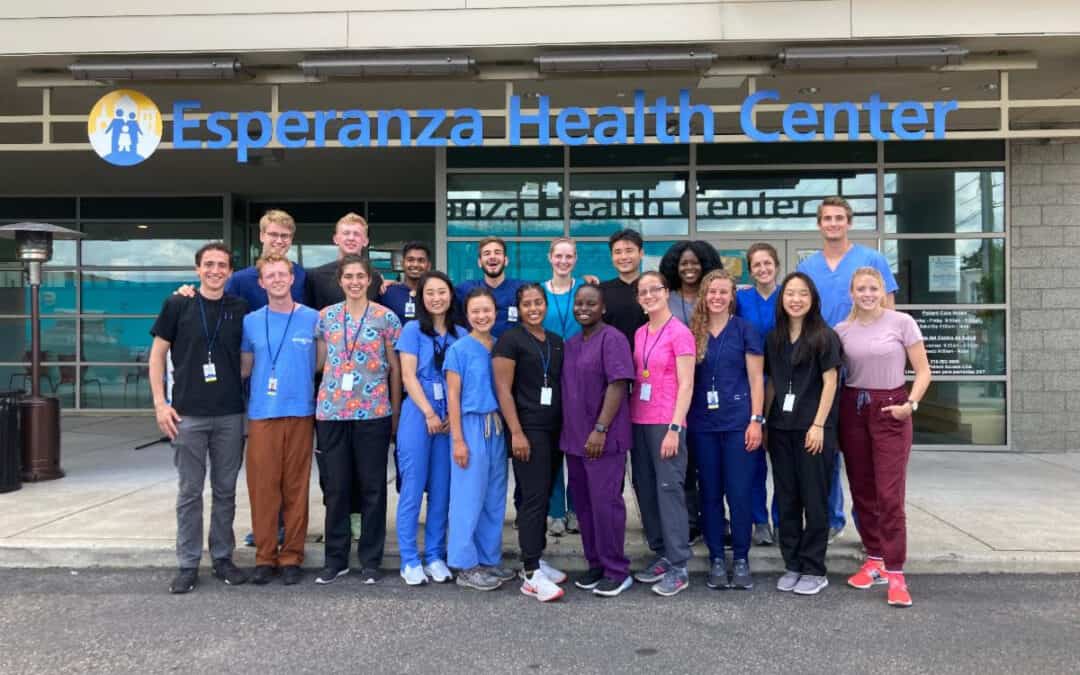 A Report of the Philadelphia Summer Medical Institute, June 26-July 17, 2021

Who would imagine that a vaccination effort to combat a 1991 North Philadelphia measles outbreak would adapt and continue today as the Summer Medical Institute (SMI)?  Or that the faithful Christians in healthcare who began it would form Medical Campus Outreach, and that SMI would partner with Esperanza Health Center for the next 30 years? And for the past three years, adult children of those original participants have applied and participated in the program! 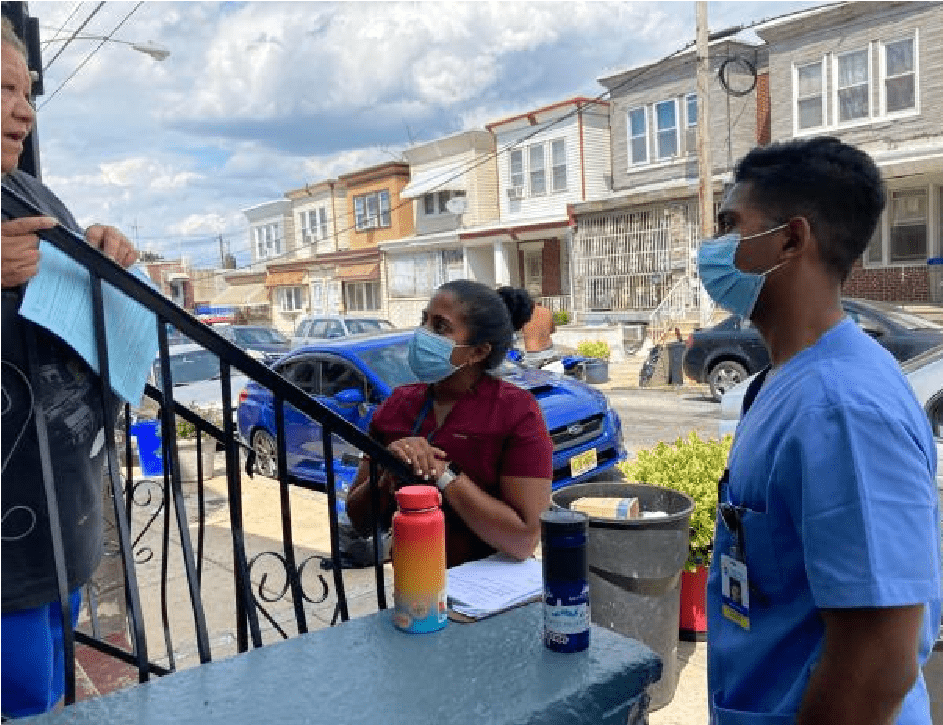 In 2021, SMI still continued its work. The program was safely adapted for 20 Christian healthcare students to  assist Esperanza Health Center’s work in the pandemic. Living separately and commuting in each day, they collected social determinants of health (SDOH) data at Esperanza, prayed with patients and referred them to social services. Other teams walked door-to-door and provided COVID vaccine information. Accompanied by three neighborhood ambassadors, interpreters, and 24 rotating faculty members, the teams were taught to listen, provide information and explain to those interested how to make a vaccination appointment.

Walking among Philly row houses in the summer heat, they encountered many who were not aware how accessible the vaccines were, and were glad for the information. On porches and sidewalks, the students prayed with the elderly, the homeless, a couple with a newborn, and families with children peeking out the door. At one home we amazingly met a local woman who had been one of SMI’s original interpreters in the 1990s, who enthusiastically prayed for us. The work is detailed here: 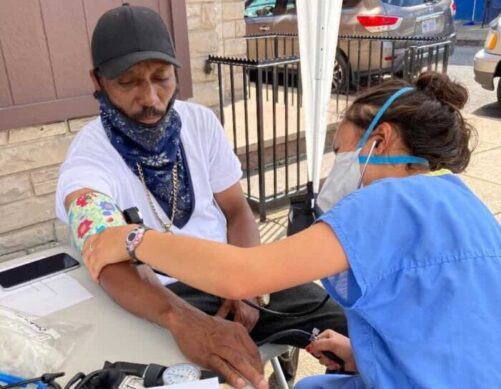 It’s been such a privilege to be a part of this program over the past 10 years. We have seen one of our interpreters come to Christ and partner churches have shared about baptizing people after connecting with them through SMI. We have developed long-standing relationships in the community and over three decades, thousands have received health education and referrals.

What I am most aware of, though, is that being a part of SMI has been a unique opportunity to witness to the work of the Holy Spirit. This is seen as we speak and pray with community members who often say they know God sent the students to provide information or encouragement. It’s also seen so clearly in the impact on the student participants. This past spring I had breakfast with a 2016 participant who mentioned that SMI was a turning point in his relationship with Christ. I have heard this over and over, yet each time it’s startling, because it comes so unexpectedly from different people, yet each with a similar message.

Each speaks about being met by a new conviction and awareness of God’s hand upon their life: in student conversations during SMI, in a letter received a few years ago from a 1990s participant, a card from a parent who wrote of being overjoyed at the newfound love for Christ her daughter had after SMI, a faculty member in 2012 who told me that participating in SMI years before had changed the course of her career. Several past participants have returned to the community as doctors and nurses at Esperanza after they finish their degrees. I could give dozens more examples.

Each time I marvel as they share these details and express renewed passion for Christ. I’m amazed because what they refer to is not something we could have planned. Over time I’ve realized that SMI—its schedule, work and speakers are merely activities, even as we plan them to the best of our ability. However, we can’t orchestrate the meaningful encounters, peripheral conversations and personal insights gained. In this respect, SMI is like a skeleton that has been given flesh and a soul, breathed into life and endowed by the Holy Spirit with an ability to transform.

This summer I dropped one of 2021 participants off at the airport, as he needed to leave SMI a day early for a wedding. I picked him up directly from his work site, because he wanted to work until the moment he needed to leave. When he got in the car I asked him how his final day went. He was momentarily too moved for words, as he started describing a conversation he had with a homeless woman. He paused and told me that when he first arrived at SMI he was already tired and eager for it to be over, and now he regretted it ending so soon. We drove on and spoke of how good God is, to continually teach us what He wants us to learn. Once again, I felt that God had met this student in a unique way. 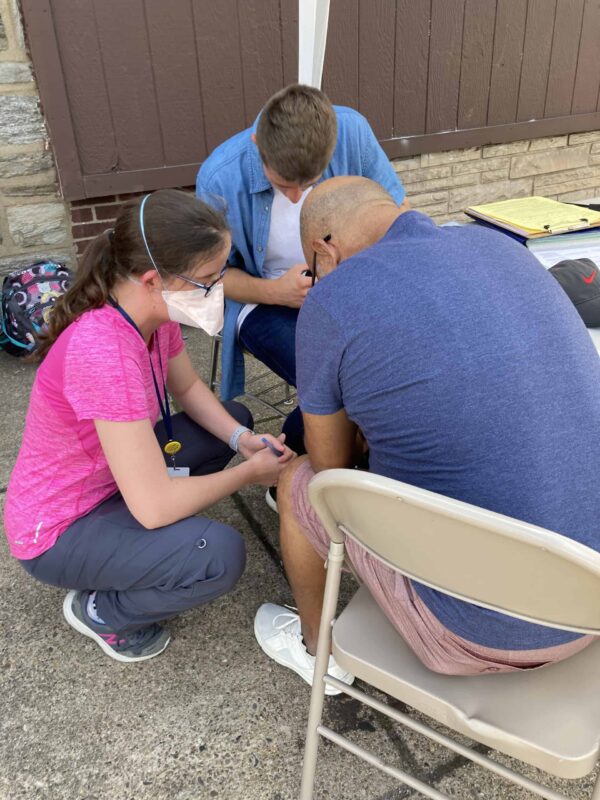 I’m thankful that God continues to use this program to draw people to Himself, renew their love for Him and give insights into His plans for them. We are so thankful for all of the volunteers, donors, Esperanza staff, church partners and interpreters who have made this program possible. By God’s grace, we hope to continue this work and proclaim  God’s name through health care for  many years to come.